HAVE YOU HAD EXPERIENCE USING CANNABIS FOR SLEEP AND ANXIETY?

The office of medical cannabis will be reviewing petitions for adding new qualifying conditions. We see sleep and anxiety improve in most people on cannabis. I submitted petitions to add anxiety and insomnia as qualifying conditions in Minnesota last year, but they were rejected on a technicality. I will resubmit soon. If you have had experience using cannabis for difficulties with sleep and anxiety, please send an email to jmirman@lifemedical.us

I would like to hear positive or negative stories and I will add them as supporting evidence with my petitions.

I wrote this personal homeopathy success story during a flight back home from a family beach vacation in the Dominican Republic. It was great, but I owe the success of the trip in part to homeopathy! Here is my story: 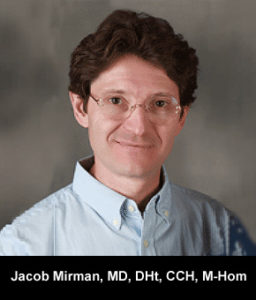 The first day we were there I struck my left second toe on an underwater rock. It seemed like a minimal injury and I continued playing in the waves. However, the pain got substantially worse. When I got out of the water to investigate, I noticed minimal swelling over the whole toe and it was turning red. I could move it just fine, so there was no fracture and the skin was intact, so there was no penetration by anything sharp, like a sea urchin needle or any other sort of a sting.

Soon the whole front part of the foot became red and swollen. I was experiencing shooting pain and all the toes on my left foot were very sensitive to touch. The anterior half of the foot was reddish-purple and swollen. (See image for comparison of my left and right foot)

By the time I got to our hotel room I could hardly walk. The pain was really bad, and I was trembling from it. Keeping the foot on a bag of ice helped. My family was getting quite anxious and suggested calling the hotel doctor. I considered it and did not think it would be productive because after all, I am a doctor. Who better to examine my own foot? 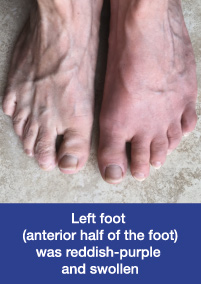 CONVENTIONAL MEDICATIONS DID NOT SEEM APPEALING

There are only a few things a conventional doctor could have suggested. An NSAID like ibuprofen would be a reasonable conventional prescription. However, what most people don’t realize is that these drugs are quite risky. Once after getting some dental work I took one dose of naproxen, also an NSAID which gave me an ulcer with severe abdominal pain for 2 weeks. I’ve seen many patients developing GI bleeds with NSAIDS, some with fairly severe anemia requiring blood transfusions. Sometimes they can even induce heart attacks. Many people die from the side effects of NSAIDs, so that was something I was not willing to try. I could have asked for some opioids such as Vicodin, but then I would have been constipated and sleepy throughout the rest of my vacation. That did not seem like a fun option either.

WHAT COULD BE WRONG?

What it had looked like most was CRPS (Complex Regional Pain Syndrome), AKA RSD (Reflex Sympathetic Dystrophy). This is when an injury causes a spreading local reaction characterized by severe pain, swelling, red-purple discoloration with mottling and swelling of the injured part, spreading up from it, sometimes involving the whole extremity and more. CRPS is usually a chronic condition, and very rare condition. Its mechanism is poorly understood and I’ve never seen anything acute resembling it until examining the condition of my own foot.

NO PLACE FOR CANNABIS IN THE DOMINICAN REPUBLIC

Some cannabis (marijuana) would have been quite welcome at this moment. I take care of many patients with chronic pain who use medical cannabis. It is quite amazing, relieving severe pains with almost no side effects and lack of any serious overdose risk. But we were on a resort in a foreign country and I was reluctant to send my family out looking for a weed dealer. Besides, to be honest, I wouldn’t know how to use it. Never have used it. Honest!

MY MEMORY AND HOMEOPATHY PROVED TO BE MY GUIDANCE

I decided that the buck stops with me. I figured the condition was very weird and didn’t make any sense anatomically which is exactly where homeopathy excels. If I couldn’t help myself, who would?

I tried a couple injury remedies and there was no improvement. I considered possible other, less common, remedy options. I remembered a case I had read about years ago involving the use of the remedy Ledum, described by one of the big homeopaths at the turn of the last century. His patient had gout and severe foot pains, and spent his days sitting with his feet in ice water. The description was quite colorful and stuck in my mind. At this point its similarity with my own condition was obvious.

I read up on Ledum and found that the description of the injured part was very similar to my situation. Severe tearing and shooting pain in the affected part, with “general shivering, and a feeling that the patient can’t endure much longer”. Also heightened sensitivity of painful parts.

LEDUM AND MY TRAVEL EMERGENCY KIT COMES TO THE RESCUE!

Luckily, my tiny travel emergency kit contained Ledum 30C. I put 3-4 pellets of the remedy into a one quarter of a bottle of drinking water, gave it a few good shakes and started taking a sip every 10-15 min, shaking the bottle before each dose.

The injury happened around noon. It was now 2 pm. Very soon after the first dose the pain lessened slightly. Three doses later I improved further and the shaking stopped. Within 90 minutes the pain was quite manageable, the foot was still swollen but not as red. By 4 pm I was back in the waves!

I continued taking the remedy every 30 minutes for a few more hours and by 6pm I could walk with only minimal limping and the swelling was lessening. The pain was minimal, and mostly just when stepping on the foot. By the next day the swelling and redness were gone and there was only a slightly bruised sensation of the second toe, as would’ve been expected from such a minimal injury. By day three I was completely well. Vacation saved!

HOMEOPATHY CAN BE VERY EFFECTIVE FOR FUNCTIONAL CONDITIONS

Any inflammatory condition, including an infectious disease, is a functional one. Patients with COVID-19, flus and other infections appear to respond well to homeopathic treatment. See our website for more info: www.FluSolution.net

THE HEALING POWER OF HOMEOPATHY

This case illustrates the power of homeopathy to heal conditions, where a slight nudge of our Vital Force causes it to take care of issues without the need to resort to heavy duty conventional methods. It works in both acute and chronic conditions. You can read more on homeopathy here. Homeopathy should not be forgotten in any case where the symptoms are due to functional changes in the body, as opposed to irreversible pathology. For example, it is often hard to treat homeopathically a severe sciatica due to a bad disk herniation. Cannabis for effective pain relief, or sometimes surgery excel in such cases. But CRPS is a “functional” state. It is caused by some changes in how our autonomic nervous system functions. If we tweak the Vital Force with homeopathy, it should be possible to improve its function and relieve the condition. Just like in my case.

“Magic is just science we don’t understand yet”
AC Clark